As the year comes to an end, I've rounded up all the stuff I'm lusting after right now. Hopefully some of it will end up in the sales so I can get some super bargains! If not...well I guess I'll just have to hunt me down some dollars! (Or pounds...that could be more practical) 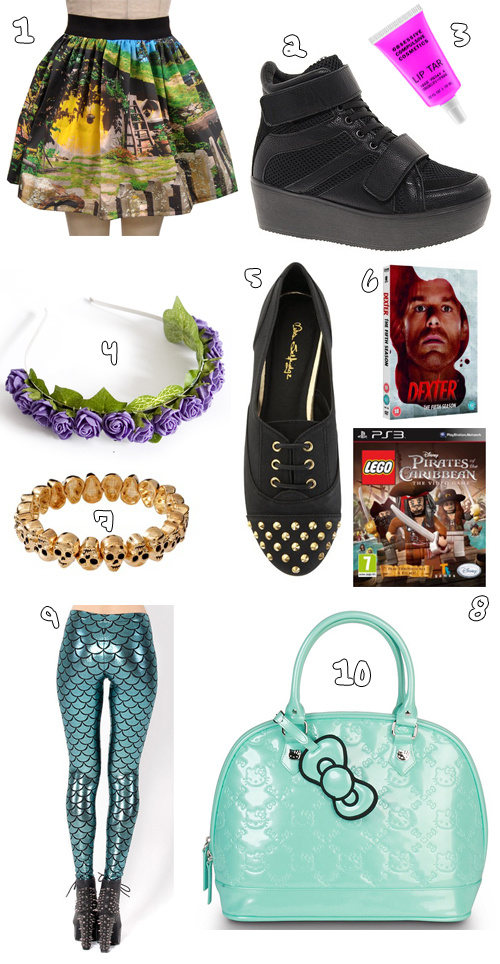 
UGH. PLATFORM TRAINERS. I don't even. and for those of you who don't know me I kind of live in trainers. Alas most of mine has worn on the sole and can no longer withstand rain...or water, or anything. So if I add a massive platform to the bottom it will take longer to wear away! Logic. Sweet platformy logic.


I've been lusting after these for what feels like years and I finally got my first as a Christmas present from my friend! I got Anime which is just perfect, and now I need Hoochie!


4. Crown and Glory Not a Lotta Rosie Headband in Aubergine Or Lilac [£15]


I have never bought anything from Miss S but my friend works there so I had a little look around and spotted these shoes, I spent a while admiring them and then left empty handed, it wasn't until an hour later when I was nearly home that I realised how badly I wanted them, so I will try and grab these sooner rather then later incase then sell out!


Because Netflix stops at season 3, and after the horrendous pain that was the end of season 4 waiting to watch this has just been annoying! Hopefully soon I can bring that longing to an end!


I don't usually buy bracelets as I tend to live in hoodies and cardigans so they never get seen but something about this one really catches my attention, although for someone who doesn't buy bracelets £8 feels a little steep!

8. LEGO Pirates of the Caribbean for PS3


Because my long red wig needs a companion and so I can pretend to be Ariel forever. Minus the part where I have to live in the sea because that'd suck, like the sea. SUUUCK. My size is currently out of stock but I'll probably just fork out the money for them as soon as they're back in stock!


Admittedly I'm already getting the lavender version for christmas, but from the inch i've seen of the bag i'm getting it's already enough to make me want it in mint too!


What are you lusting after and/or hoping will pop up in the sales?

Other places to find me

My name is Cassia, I am 27 and am the owner and creator of Peppermint Puff. I make unique, handmade and one of a kind jewellery!

~ The wallpaper was made exclusively for Peppermint Puff please do not reuse it.